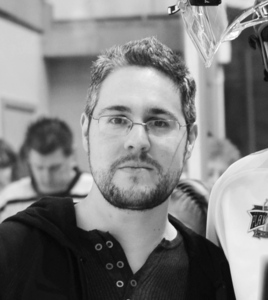 I am currently the Marketing and Communications Officer at the Yorkshire Dales Millennium Trust. My role is to further enhance the reach of the charity whilst improving fundraising and other streams

I am currently the Marketing and Communications Officer at the Yorkshire Dales Millennium Trust.

My role is to further enhance the reach of the charity whilst improving fundraising and other streams of income. I edit the charity's website, social media, newsletters and other communications s well as broaden its reach in traditional and other media.

I have sole responsibility for the charity’s merchandise and I lead our celebrity and young ambassador programme.

I have been in the role since January 2019.
Previously, I was the media manager at St Helens Rugby League Football Club, a multi-million pound sporting business based in St Helens.

In this role I devised, handled, managed and developed all media and PR communications for a club that regularly attracted more than 14,000 people on matchday, alongside its official websites (an audience close to one million unique visitors per annum), social media and digital outlets (95,000+ users and more than 550,000 views on YouTube) and matchday programmes (ave. 1600 copies per week) as well as several other marketing materials and tools such as e-zines, video content and brochures.

I had to be proactive and able to handle pressure whilst maintaining the strong image of what is a world recognised rugby brand. To do this I proactively managed the relationships with key local, national and international media as well as developing new outlets in print, digital and online. During the Rugby League World Cup 2013 I was media and club liaison for New Zealand who used our training venue as their base. I was also in touch with journalists in Australia to make sure the club is prominent in world Rugby League.

I focused my efforts on key local and national media by working in partnership with them and identifying potential good news stories. This happened with print, radio and TV contacts and not being afraid to discuss controversial subjects. I believed for the club to be successful, its PR needed to be wide-ranging and its players media trained so they had the confidence to express themselves in a professional manner.

With that in mind I instigated a crisis management plan which aimed to minimise the impact of a serious story breaking around the club - which was implemented when our head coach was relieved of his duties, thus reducing the potential damage to our image and brand - and I devised and delivered media training to players and staff. As a result, during my time at the club, the players were some of the most media friendly in the sport.

I am no stranger to high profile, large-scale media as I was responsible for managing the entire media operation for the club’s Wembley and Grand Final appearances. Since 2007, I handled the media management for two Challenge Cup Finals and six Grand Finals. This involved maximising the media coverage for the event, ensuring players and coaches are on message – i.e. 'we want to win' – and also the subsequent coverage post match win or lose. This also involved managing media expectations on an open top bus tour after a successful cup run, the PR around the 2014 Super League Grand Final that saw Ben Flower assault our player Lance Hohaia and protecting players following a defeat.

I also devised the media and communications for Saints' transition from Knowsley Road to its new stadium at Langtree Park. This included a year on the road in a neutral stadium and had to be handled with tact. Moving stadiums, whilst considered a good news story, can be negative if handled incorrectly. I used the press to put out concise and clear messages to our fanbase, which at that time was around 8,000 season ticket holders and many tens of thousands of other loyal fans using a variety of methods. I launched a standalone website and made sure relevant personnel represented and knew the key points when speaking to the media. There were plenty of parties involved in the building of our new stadium and this was tricky to achieve with so many stakeholders and a lack of budget.

As a close-knit town, our fans were deeply involved with the club and the move whilst positive and needed, stirred the passions. Knowsley Road was part of the community since 1890 and many whilst understanding the need to move, were saddened it had to be closed. All our communications made reference to this heritage but talked about a bright future. We used the expertise of many different organisations to achieve this and I was part of the communications lead team that ensured the transition was pain free.

I also expanded my role to maximise the opportunities presented by a globally recognised brand. I launched an online magazine – the first of its kind in the sport, and also conducted a root-and-branch review of the club’s online presence and offering. This led to an increased interactivity between the club, its fans, our sponsors and business partners who use the club, its website and social media to promote their offerings as a partner, rather than an advertiser. I also regularly represented the club on radio and have appeared on CityTalk 105.9, BBC Radio 5Live, BBC Radio Merseyside and Drystone Radio. I am comfortable in front and behind the mic.

I developed podcasts and online television broadcasts, all of which reinforced the St Helens' brand and its qualities across the Internet. These were linked with our increased Social Media offerings of which I had sole responsibility for. Our Facebook was the fastest growing week on week of the top five in Super League as was the club's official Twitter which, likewise, grew at a higher rate than its peers. Social media strategy also included new platforms such as Snapchat and Instagram. I also undersaw a complete transformation of the club's website on two occasions.

I initiated marketing campaigns and ticketing initiatives, and forged relationships with the wider business community using corporate events and networking through Chambers of Commerce both in St Helens and across Greater Manchester. In particular, these partnerships helped bolster the non-matchday business at the club.

I advised the club's sponsors on PR and marketing policy with the express aim of getting the best out of the relationship for both parties. I had to be creative and also make sure the club delivered on its pledges especially around customer service. To do this took liaison with all areas of the business including the marketing team to create quality programmes and schemes to increase matchday attendance and 'bottom line' figures in areas such as retail, sponsorship, ticketing, hospitality, conferences, weddings and other events.

My commitment to the organisation and its fans was rewarded with the main supporters' club awarding me the Brian Dillon Award for services to St.Helens R.F.C. This is given to employees of St. Helens R.F.C . who go above and beyond for the club.

Writing for several different organisations such as SME's, large corporates and educational establishments for example has honed my skills as an editor and a writer and made me very confident commercially. I am aware of how a piece can reflect a company or organisation’s image and the importance of maintaining balance in every story. Fundamentally, as a journalist, I know what is needed in order to gain column inches in other publications. I can spot an opportunity and pursue it with vigour and I believe both these aspects would be invaluable to your organisation and your partners.

I have also written within an Internal Communications environment where a clear and consistent message is essential. I have experience of working with a variety of subjects and styles as well as large corporate businesses (BP, Pilkington etc), not for profit organisations (Cancer Research, Brake etc), government bodies (Department of Trade and Commerce, Department of Transport, Railtrack), educational establishments (Bradford University etc), wide sections of the public and stakeholders. As editor of Phones4u's News4u magazine, it became the company’s single most important communication device within a short space of time.

At World’s Fair, I led a team of three journalists and up to six designers. My editorial team consistently hit targets and produced work of the highest quality and I also instigated training programmes and coaching sessions for my journalists so they get the best out of their stories and interview opportunities. My design team also made a significant impact on revenue, due to new procedures and quality checks. Adverts were designed to an excellent standard, and the number of advertisers increased. This wasn’t as straightforward as perhaps it would have been due to some reluctance from members of the team to adapt to new working practices. However, by explaining why we were adapting this approach, there was an understanding. I also incentivised them by running small competitions.

I also made sure I sold adverts now and again on the publications to understand exactly what the customer needed from each title and the company as a whole.
My managerial ethos is to treat people firmly and fairly and strive for a culture of success through hard work and shared responsibility. I also believe, as stated above, managers should get involved with what they are trying to influence so they fully understand the issues. I am also aware of my legal responsibilities as a manager and employer and I am not afraid to manage performance and have tough conversations with people.

As a result I will bring passion and commitment to your organisation, as well as the pragmatism, tact and diplomacy that comes through wide experience of media and communication management.