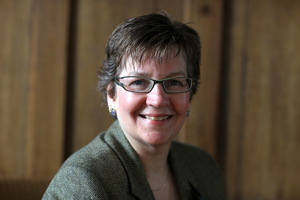 Elected to Hounslow council in May 2018, I currently write about life as a new local councillor representing Turnham Green, one of three Conservative wards in an otherwise Labour council. Turnham Green

Elected to Hounslow council in May 2018, I currently write about life as a new local councillor representing Turnham Green, one of three Conservative wards in an otherwise Labour council.

Turnham Green ward incorporates the beating heart of Chiswick - Chiswick High Road - which is currently facing a retail crisis with shops, cafes and restaurants struggling to survive against the chains when rents, and consequently business rates, are at sky high levels. I&#39;ve launched a Chiswick shops task force to lobby local and national government; support existing retailers in the current challenging retail environment; advise potential shop owners thinking of setting up shop in Chiswick; and encourage local residents and visitors to put independent shopping on their shopping lists.

I write about London, specifically to help visitors make the most of their time here. I was a London Ambassador for four years from 2012, based at key tourist locations offering information and advice as well as free maps to visitors, adding value by providing insider tips having lived in this great city for over 40 years. Being on the receiving end of questions gave me great insight into what tourists really want to know. I was based in Trafalgar Square, Parliament Square and More London where I stood in the shadow of The Shard, next to Tower Bridge and opposite the Tower of London - surrounded by the oldest and the newest landmarks in London. I&#39;ve lived in Chiswick for over 35 years and have a detailed knowledge of this London village.

I also write about reputation crisis management. I was head of press for the Corporation of London (the local authority for the City of London) when the Bishopsgate bomb went off on 24th April 1993 and, have worked on many other crises before and since including airline crashes, legal challenges, corporate failures such as infiltration by illegal workers, and charities faced with NIMBYism. I offer reputation crisis management workshops to charities, independent businesses (especially restaurants and food businesses) and airlines.

With experience of both sides of an issue - the corporate and the journalist - I understand the pressures, limitations and tensions involved in getting to the heart of a story. I can help both sides see the other&#39;s view and so get more out of it for the reader/viewer/listener - and the company/organisation seeking coverage.

Blog
I blog about crisis management on www.crisismanagementblog.com

The Green
A glossy west London lifestyle magazine now called The Resident: For three and a half years I wrote the monthly local issue feature. Subjects ranged from the environment and waste to the arts via adoption, flooding and dating plus, often, the risks to our independent shops and Chiswick&#39;s village atmosphere. I also wrote food and restaurant reviews; profiles of celebrities; a business interview series; plus, using a pseudonym, the Kids&#39; Corner column.

PR Business
For six weeks I had my own column, a sideways look at freelance life, in a brand new magazine for the PR world. Sadly, the magazine folded (not due to my controversial views).

Corporate
Saying the right things, at the right time and in the right tone, internally and externally, are essential to business success. Being prepared for the worst, with draft statements ready to be adapted and leaders who understand the importance of being seen and heard, is the only way to survive with reputations intact. Get it right, and reputations will be enhanced. Get it wrong, and your business&#39;s reputation - and your reputation - might never recover. Be ready. 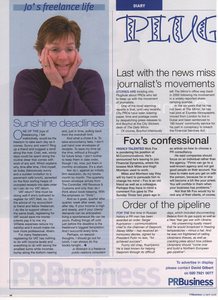