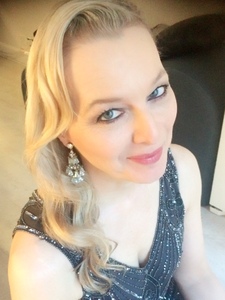 Karen Krizanovich is a journalist, writer, researcher and broadcaster based primarily in London, with credits on 24: Live Another Day (2014), Gravity (2013) and Red Dwarf Back To Earth (2009). Karen

Karen Krizanovich is a journalist, writer, researcher and broadcaster based primarily in London, with credits on 24: Live Another Day (2014), Gravity (2013) and Red Dwarf Back To Earth (2009).

Karen conceived, researched and presented Whistledown Production/BBC Radio 4‘s groundbreaking original radio documentary entitled Svelte Sylvia and the Hollywood Trimsters. ‘Sylvia of Hollywood’ was Tinsel Town’s greatest fitness/beauty expert yet she was wiped from history until this documentary and the Wikipedia page built by Karen from her own research brought Sylvia back to life.

Trained in Philosophy with an MBA in Film Finance, Karen is a brand ambassador for Picturebox Films. She has appeared on over 75 different TV shows, including CNN and Newsnight, with live outside broadcasts from the Cannes Film Festival – an incomplete list is online at IMDb.

Karen’s been published in The Times, Reader’s Digest, The Sunday Times Style, Red, The Independent, The Telegraph, The Guardian Film Blog, Elle, T3, The Daily Mail on relationships and social mores, Entertainment Weekly and Cosmopolitan among many others. She is also Editor-At-Large for Civilian magazine.

Karen is the honourary secretary of the London Film Critics’ Circle and a jury associate for the international film critics’ association FIPRESCI. Her review outlets are currently Monocle24 Radio, Radio Times and Scotland’s The List. Her written reviews, including early work for Empire, are aggregated at Rotten Tomatoes.

In the 90s, Karen was Dear Karen, the sarcastic beloved Agony Aunt of Sky Magazine’s must-read comedic advice page. Dear Karen’s past posts are being archived on Pinterest at Dear Karen columns.